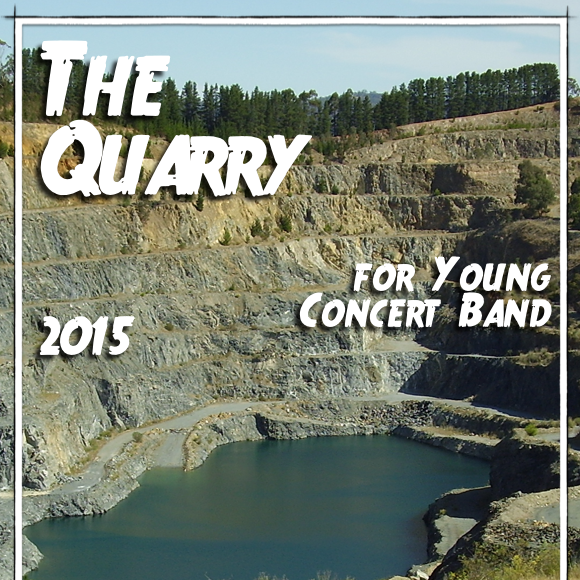 This piece was composed for and premiered at the 2015 Limestone College Middle School Honor Band Clinic. This wonderful annual event offers middle school band students the opportunity to come participate in a great educational clinic for virtually no cost to their schools. As a part of the clinic, this piece also led to giving the students a bit of history of the campus of Limestone College.

The college campus features an old, defunct limestone quarry, from which some of the limestone used to construct the Washington Monument was sourced. Additionally, this quarry was a part of a mineral spring that lead to the grounds being used, at one time, for a luxury spa and hotel - that old facility now housing the Limestone College administration offices (but not the luxury spa, any longer!)

In composing The Quarry, my aim was to depict the monolithic appearance that a quarry has - standing tall above its workers, showing off broad and storied stone faces - and to also bring a sense of the work of the quarry, as workers toil away with their pick-axes, shovels, and other tools, trying to liberate the walls of their valuable stone.

In order to bring the larger-than-life profile to the music, the low voices of the ensemble are employed in something of a passacaglia-type foundation that consists of a modal-based line and open intervals, allowing the timbres to resonate in the call. The repetition of this line suggests the nature of the large walls extending upwards and sideways, seemingly endless.

As a treat for the percussionists, the work of the miners is brought to musical life through the use of unusual implements and instruments, namely shovels and chains. While some care will need to be taken to teach the students how to use those implements carefully and safely, the resulting practice and performance will become a fun treat for a musician of any age!