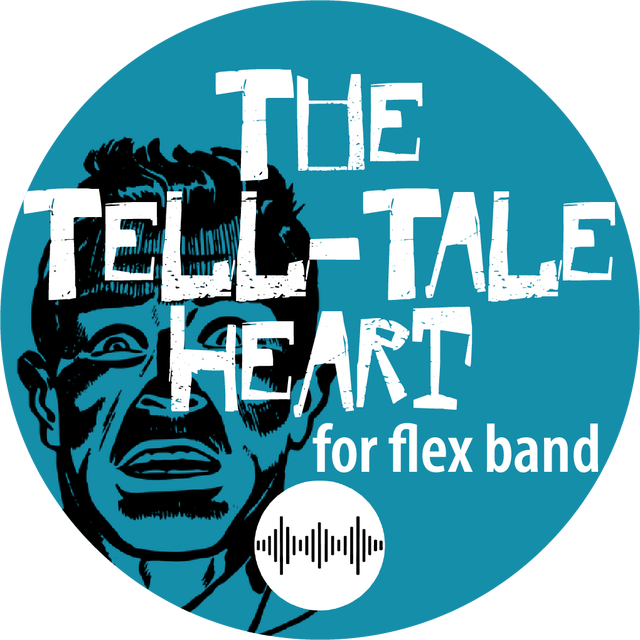 The Tell-Tale Heart for Flex Band

As a child, I was an avid reader, and among the stories and books I enjoyed were horror and thrillers - or at least the adaptations for kids. Among one such collection of short stories was a version of Poe’s The Tell-Tale Heart, and I really fell in love with it.

Years later, as I began my career as a music educator, I found myself working and living in Baltimore, Maryland - Edgar Allan Poe’s home. As such, his stories were a local treasure and often the topic of English Literature units in the schools. This brought his stories back to my attention, and now in the “big kid” versions.

The main motif in Poe’s story of The Tell-Tale Heart is, of course, the heart beating from under the floorboards, reminding the narrator of that which he has done. In musical terms, this motif translates ever-so-perfectly into the percussion section, where (in this work), the concert bass drum becomes the absolute central character to the programmatic story.

This piece unfolds much in the same way as Poe’s story, with an introduction into the world in which the story exists. As the tale continues, we’re taken into our narrator’s world of madness with the sense of insanity and ferocity growing throughout the duration of the whole work.

A personal aside that I find quite amusing, or delightful, or maybe even creepy: My work on this piece fell during a time in which my professional obligations had me quite busy; my days were full, top-to-bottom, with responsibilities to people and deadlines I had to meet. But my passion for this project wouldn’t subside long enough for me to “get around to it.”

At night, during those moments when I would roll over and toss & turn in bed, my mind would come back to consciousness and this project continued to push on my psyche. Much of this project came to be through late-night/ early-morning work sessions, while the house was dark and the rest of the world asleep. Just like the tell-tale heart itself, this project continued to call out to me on a regular basis, just wanting to be completed.

This work is written with five flexible parts, each transposed for all options in your band. Additionally, three percussion parts (one mallet-heavy, one snare drum-heavy, and one for timpani) are also included.

The Digital Download includes scores formatted for Letter and Tabloid (11x17) prints, all copies of parts, a demo MP3 of the work itself, along with a click-track MP3 (including 2 bars for nothing), and an XML file that you may use in SmartMusic.