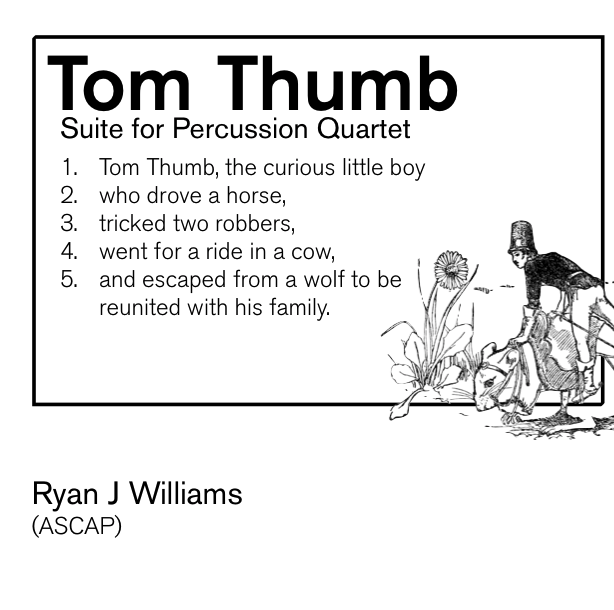 There once was a poor peasant couple that looked to the other families in their village with longing. They wanted nothing more than to have a child of their own. Their desire was so great that the wife said, “even if it were no bigger than my thumb, I should be quite content.” And thus they were blessed with a child of their own.

While working one day, Tom’s father, a woodsman, wished he had some sort of assistance to bring the horse cart out to the wood for him. Tom, wanting to help his parents, told his mother he could drive the horse out to the wood. Skeptically, his mother agreed to let him try, harnessed the horse, and lifted Tom to the horse’s ear, where he sat and called out direction to the horse.

Two men, up to no good at all, spied Tom in the village and had the idea that with his small stature, Tom could easily help them to slip into the parson’s house and make off with the valuables. With a scheme in mind, Tom slyly smiled and agreed to help the men. He slipped through the window bars of the house at night and walked across the room, where he shouted questions back to his accomplices. Hearing the noise, the cook sleeping in his bed in the next room awoke with a start and scared the two men off.

After escaping the criminals who wished his help, Tom ran out to the barn, where he fell asleep in the warm and soft hay loft. Not seeing the small lad, the maid scooped a big pile of hay into the cow’s feeding trough in the morning, and by the time Tom woke to find his predicament, he found he was inside the cow’s mouth. From within the belly of the cow, Tom cried out “Don’t bring me any more hay!” The maid, frightened, brought the parson out to the barn. Tom cried again, “Don’t bring any more hay!” The parson, likewise confounded, thought the cow bewitched and promptly had it slaughtered.

5. and escaped from a wolf to be reunited with his family

The remaining entrails and organs from the slaughtered cow were tossed out behind the parson’s house. A hungry wolf saw this from the wood and at his first opportunity, ran up to the pile and swallowed up the stomach whole. Tom had no chance to escape! Thinking quickly, Tom called out to the wolf to tell him there was more food to be had, and led the wolf back to his home. Here, the wolf slipped into the pantry and ate his fill. However, having eaten so much, the wolf was no longer able to slip out the same way it came in, and was trapped! Sensing his opportunity, Tom began to scream and shout from inside the wolf. This ruckus awoke his parents, who came to find a wolf in their pantry. Father grabbed his axe and called out to mother to get the scythe. Tom cried out, “Father, it is me, Tom!” Hearing his son’s voice at last, the woodsman knocked the wolf out with a blow from the back of his axe and carefully cut the wolf’s body open, freeing his son and uniting the family once more.
Add to Cart